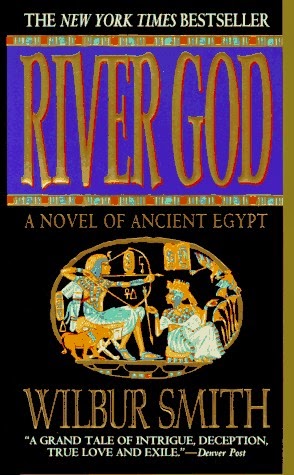 Reading ‘River God’ by Wilbur Smith was an entirely new and wholesome experience. The story is a very long one, almost a mini epic, set in the ancient Egyptian Society, spanning the reign and lives of three generations in a very powerful dynasty. It’s a memorable tale of love, loss, and miracles in the land of gold, involving Lady Lostris and beloved Taita.

Taita is a slave, and an eunuch. Spare your assumptions; he is nothing like your imagination. He’s the most loved and cherished character in the book. He is the hero, one of the most memorable characters I’ve ever come across. He starts as a slave, then proceeds to become Lady Lostris’ confidant and guide, and grows into one of the most influential, wise and powerful personality in the Egyptian society. He was forced to become a slave at a very early age, and was deprived of his right to live as a human male. Still he’s loyal, smart, resourceful, and has many secret inventions and parchment rolls to his name. There was nothing he couldn’t cater to, be it medical emergencies, war strategies, births, deaths, marriages, journeys or even escapades. Reading him is a beautiful journey, and an exciting adventure.

I loved his relation with Memnon, Lady Lostris’ son and his friendship with Tanus, Memnon’s real father. Taita becomes the keeper of many a secrets, one of them being never to let Memnon know who his real father was. These emotional aspects make the story unforgettable. The war with the Hyksos, the powerful and almost undefeatable enemy who came with horses and chariots, something the Egyptians had never seen before, was a gripping scene. The end is sad, as death takes away many of them, leaving Taita so lonely.

The best thing is perhaps Taita actually existed sometime in history, though the historical accuracy of the book is questionable. The next books in the series are ‘The Seventh Scroll’ and ‘Warlock’. I haven’t read them yet but will soon do to again witness the life of Taita.

For Tanus, the fair-haired young lion of a warrior, the gods have decreed that he will lead Egypt's army in a bold attempt to reunite the Kingdom's shared halves. But Tanus will have to defy the same gods to attain the reward they have forbidden him, an object more prized than battle's glory: possession of the Lady Lostris, a rare beauty with skin the color of oiled ceder--destined for the adoration of a nation, and the love of one extraordinary man.
#atozchallenge book review