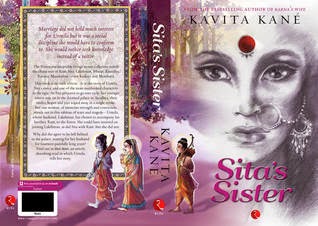 As the title says it, it's about Sita's sister, Urmila, also Lakshman's bride, whom he left behind in the palace of Ayodhya for fourteen lonely years. She could have insisted on joining her husband as Sita did. But she did not. Instead, she silently braved tears and tragedy and loneliness. Why? This is her story: Urmila, the most overlooked character in the Ramayan.

From the bestselling author of Karna’s Wife, comes this book about Urmila, Sita’s sister and the neglected wife of Lakshman, and one of the most overlooked characters in the Ramayana. As Sita prepares to go into exile, her younger sisters stay back at the doomed palace of Ayodhya, their smiles, hope and joy wiped away in a single stroke. And through the tears and the tragedy one woman of immense strength and conviction stands apart—Urmila, whose husband, Lakshman, has chosen to accompany his brother Ram to the forest rather than stay with his bride. She could have insisted on joining Lakshman, as did Sita with Ram. But she did not. Why did she agree to be left behind in the palace, waiting for her husband for fourteen painfully long years? From the bestselling author of Karna’s Wife. The most detailed retelling of the story of the legendary Urmila, little known in mythology. A riveting combination of fact and fiction that will keep readers engrossed.

Ramayana and Mahabharata are the Indian epics with numerous versions, perspectives and re-tellings. I have not read this book but I am very curious about the character Urmila and about the Ramayana from her perspective. Like reading 'Yagyanseni'-the Mahabharata from Draupadi's perspective did change certain viewpoints I had held earlier, and altered some things I took for granted. This book is in my top to-be-read list. I really want to know the story of the lesser known character- the most overlooked character in Ramayana- this forgotten heroine of Indian literature-Urmila.