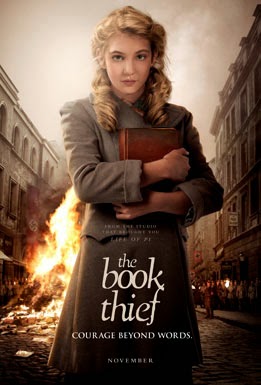 She’s the Book Thief, so beautiful a person, as described by Death who narrates her story. I loved the movie; I haven’t read the book. The story follows Liesel from her childhood to teenage years, her growth amidst the tense surroundings during the world war.

When Liesel’s brother and mother die, she is send to foster parents Hans and Rosa Hubermann. She is just ten then. She slowly develops a liking towards Hans and finds friendship in Rudy, the local boy. Hans teaches her to read, starting from alphabets to full-fledged books and she’s eventually able to complete reading her most treasured book ‘The Gravedigger’s Handbook’. She discovers her love for the written word, and utilizes the basement wall to create her own dictionary of difficult words, reading one book after another. She’s surprised by book burnings done on Hitler’s commands, and steals a book from among the ashes. She also gets invited to Ilsa Hermann’s library, to read her favorite book every day.

Then Max arrives in their lives, whose friendship would be most cherished and mean the world to Liesel eventually. He is a Jew whom the Hubermanns provide a safe harbor, a refuge, unknown to the neighbors, lest they should be considered as traitors. Max stays in the basement for months, recovering from illness, and missing the open night sky. Liesel grows close to him gradually, describing him how the weather outside is, how the night sky looks, and each minute detail of everyday life. She brings bucket full of snow to the basement for Max, and happily plays snow fights with him and Hans. She reads to him relentlessly when he’s sick, and comatose, hoping he’d hear her words and wake up. Theirs is a beautiful relationship.

Liesel is one of the most memorable characters.  “Through the books she steals, reads, and writes, she evolves from a powerless character to a powerful character who deeply empathizes with the voiceless.”
movie review