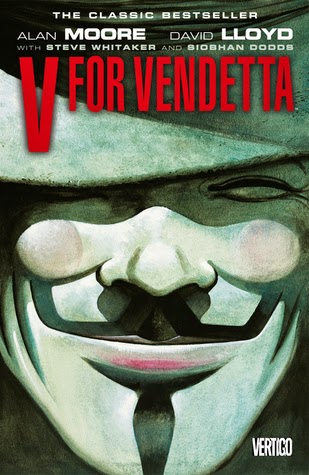 It is a movie adapted from a graphic novel of the same name by Alan Moore and David Lloyd. Set in the dystopian, futuristic UK against the backdrop of oppressive fascist government, it tells about a vigilante called V- the mysterious man wearing a Guy Fawkes costume who works to bring down the government. His talks and speech patterns are unusual- full of artistic ornamental words starting with 'v', quotes and an influential intonation. The story is about his encounter and relation with Evey Hammond, and how they work together to reveal the governments' true face to the public.

The movie itself is very thought provoking, influential and a must-watch. Anonymity, unknown identity and stories of such vigilantes interest me and this one is one of the best movies I have ever watched. The final climax is just awesome. This is one masterpiece of ideas.

Some of my favorite quotes from the movie:


“Artists use lies to tell the truth. Yes, I created a lie. But because you believed it, you found something true about yourself.”

“You wear a mask for so long, you forget who you were beneath it.”

And now, the best quote which still manages to overwhelm me every time I read it:


“But what I hope most of all is that you understand what I mean when I tell you that even though I do not know you, and even though I may never meet you, laugh with you, cry with you, or kiss you. I love you. With all my heart, I love you.”