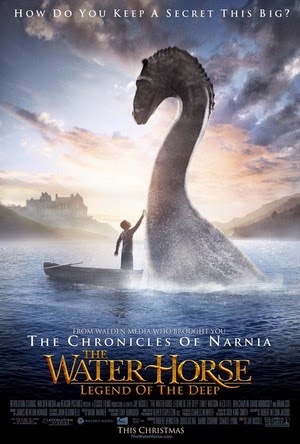 First originated perhaps in Scottish or Celtic folklore, water horses were said to be sea monsters- unusual looking animal, a long necked beast like a sea serpent with four limbs and a tail. These creatures found place in legends, tales, and even in the 18th and 19th century literature. Some voyagers claimed to have sighted them around 18th century and more than a few gave detailed description about how they looked. This mythical creature has been associated with magic and many abilities.

A fantasy family drama film 'The Water Horse: Legend of the Deep' was released in 2008. A children's movie, I had loved watching it with my sister. It was the time when we were exploring fantasy world through Harry Potter movies and Narnia, and this one offered an entirely new realm. The story line was simple enough- a lonely boy discovers a mysterious egg that hatches a sea creature of Scottish legend. So exciting for the child in me! How he hides the fast growing animal from his family, playing with it and accompanying it to every nook and corner of the house, is a very interesting watch.

My favorite part in the movie is when the boy rides the water horse through the sea, trying hard to let him escape capture. I so want to befriend it, sit on the back and ride on a mythical creature. :)
#atozchallenge movie review