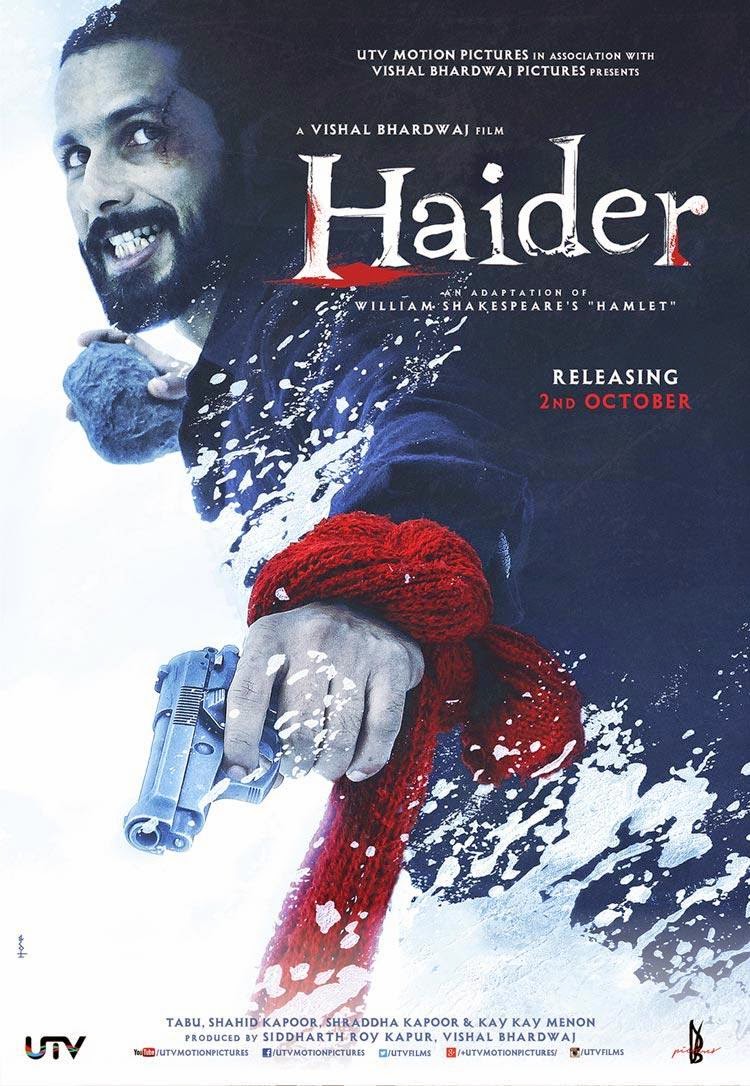 It is in the tragic stories that the characters have the depth, and complexities of a human. May be that’s why I find tragedies are great stories. Inspired from Shakespeare’s Hamlet, Haider is a heart wrenching tale of a son in search of his missing father, set against the backdrop of the Kashmir- a paradise stained by blood and suffering.  It is Vishal Bhardwaj’s third adaptation of Shakespearean dramas.

Kashmir then(1995) was riddled with violence, bloodshed and curfews. A constant never ending war raged between the militants and the Indian security forces. A permanent state of emergency existed. Civilians were paraded from every home, every family, for the witnesses to identify the suspects. The lucky ones were dismissed, but those detained went through torture and interrogation in MAMA2. And then they disappeared. The officers and authorities claimed to have no knowledge about their whereabouts. A few days later some of the bodies would be found in the river Jhelum. This went on for years. The number of missing persons increased up to 8000. Their wives were called ‘Half-Widows’. The themes and topics touched in the movie clearly show the extent of research the writers did for scripting it, showing the unrest, the ever existing tension in the air, the politics, the torture, and the brutality. ‘All of Kashmir is a prison.’ -Haider says. And that was the reality of this paradise. 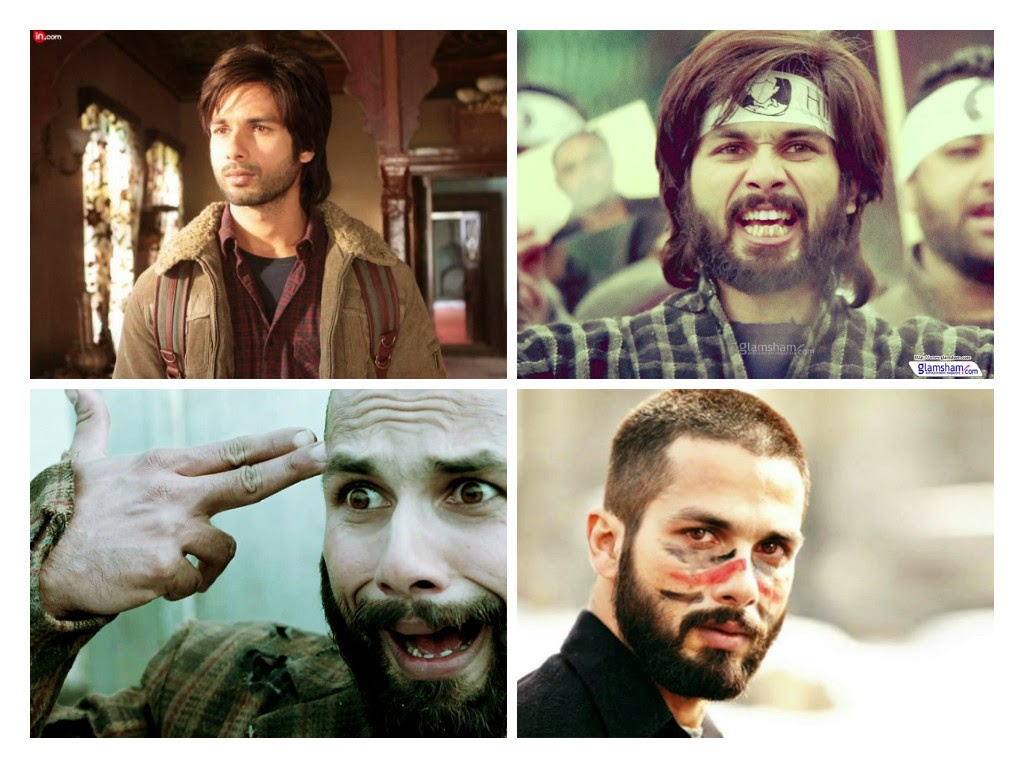 Shahid Kapoor has done a fantastic job portraying Haider- every change that he goes through in the movie- a student returning from Aligarh to his home ‘Islamabad’ in Kashmir, a desperate son in search of his missing father, a confused son who cannot understand his mother’s character, and a post traumatic Haider on the verge of insanity perplexed in truths and lies and ‘to be or not to be’s. Extremely praiseworthy acting and his best till now! Tabu as Ghazala, Haider’s mother is the most complicated and mysterious character. Applauds for Tabu’s acting and the depths she’s portrayed. She almost stole the show; amazing me constantly, throughout, till the very end. I kept thinking- What is she actually thinking? Is she sad, or is she happy behind those sad eyes? Where does her loyalty lie? Is she the hero? Is she the villain? She in myriad ways becomes the central character in the tale. She’s perhaps ‘the face that launched a thousand ships’, and the reason that started something that ended in blood and gore. 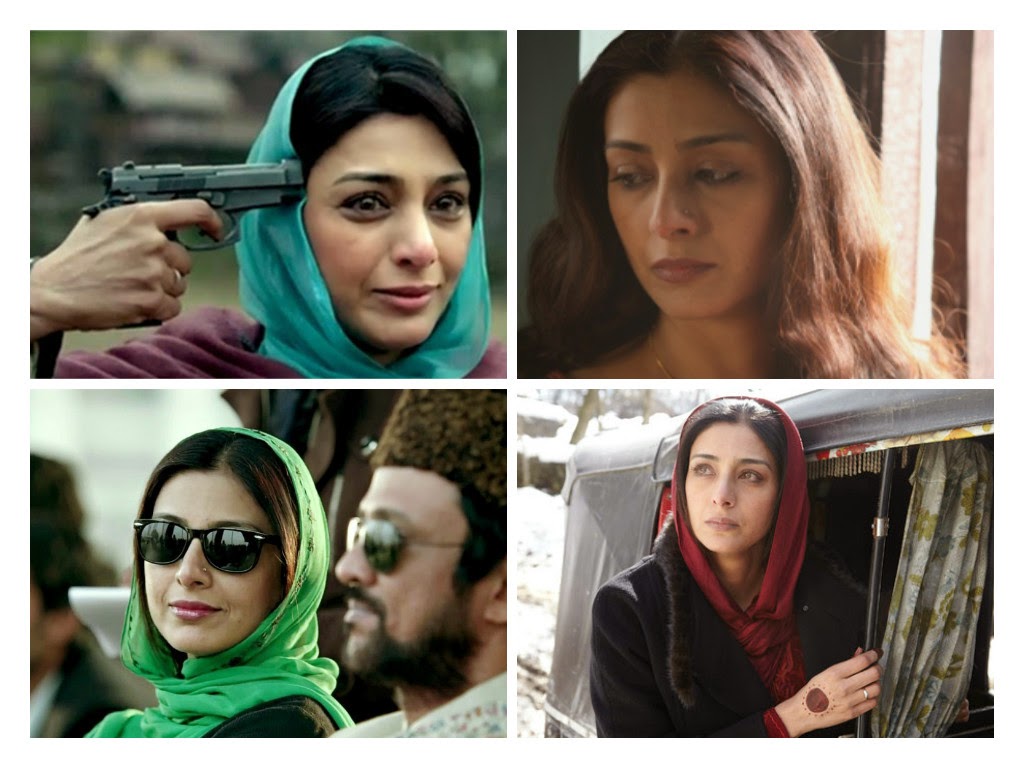 The mother and son relationship is something to watch. Haider loves his ‘mauji’ a lot but accuses her of adultery and even holds her responsible for his father’s death. Ghazala loves him the most; she emotionally blackmails him to do things her way; perhaps even tries to manipulate him but that, we audience never come to know for sure. We keep guessing what her choices are, and what she really wants. Did she really love Khurram, or was she just looking for security? We can’t seem to place her anywhere- good, bad, or in between. Kay Kay Menon plays the plotting and scheming uncle well. His undying love for his ‘bhabi-jaan’ wrecks havoc in so many lives. Shraddha Kapoor plays the strong minded independent journalist Harshi, who loves Haider and goes against her father and brother to protect him. 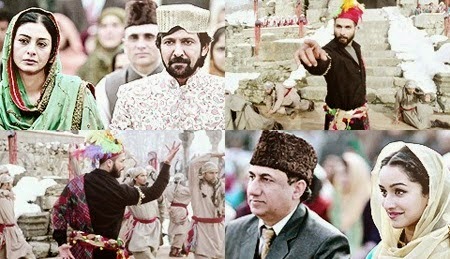 Kashmiri folk songs set the mood and feel in the film. Haider misses his father remembering his favorite song that he used to sing. Ghazala and Khurram, the uncle have a light intimate moment singing and dancing to Kashmiri folk, that’s looked down upon by Haider. The cinema introduces the word ‘chutzpah’- equated to AFSPA- Armed Forces Special Powers Act, the security law that gives the Indian Armed Forces immunity from prosecution while operating in the militancy hit areas that has been criticized by human rights groups. The only comic relief is offered by the Salman-Salman duo, who mimic the bollywood actor as his songs croon in the background.

Certain scenes gave me chills- the one where civilians are paraded, Haider’s weird behavior after visiting the grave and the very last scene before the film closes. I somehow liked the scenes that Haider and Ghazala shared. Ghazala gave me goosebumps. I haven’t read hamlet, so I can’t do a comparison of characters; still Haider has a long story of its own. Worth a watch.
Ghazala Haider Hamlet movie review shakespeare