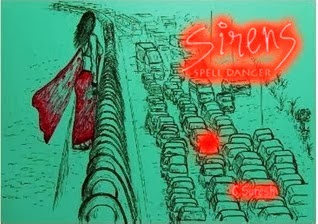 I received the free ebook as a part of the Write Tribe's Book Review Program. The name was not that catchy but seeing the coverpage I was curious. It’s a compilation of three short stories by three different authors- C.Suresh, Radha Sawana, and Karthik L. I guessed the first story was about ‘Sirens’, second about ‘spells’ and third about ‘dangers’. But it is not so actually.

I liked reading the book, and being a part of this review program. And hats off to the detailed researches done by the authors.

In Greek mythology, sirens are creatures half woman half bird who lured sailors to destruction by the sweetness of their songs.

Femme Fatale
Following a femme fatale he met in the bar to a hotel room puts Vikram in danger. He is trapped in the web of a murder, kidnapping, and a probable terrorist attack. An IPS officer to be, yet his lack of proper judgement and suspicion of the situation, has him in difficult consequences. He is confused- whom to trust and whom not to. There are quite a few impressive action scenes in the story. And there’s the race against time feel too.
But sometimes it also has a ‘been there’, ‘seen that too many times’ kind of feel and the twist is not surprising enough. Still, a good story as a whole.

This was one of the best short stories I have read in the past few months. I was hooked from the first few lines to the last sentence. It was that interesting.

There’s a murder, or a probable suicide of a businessman at a very unexpected place. No one seems to know why he was there. The post mortem and forensic reports say it’s cyanide poisoning, but how it found its way into his body is a mystery. And the police have got no leads in the case except a laminated paper with a picture of a weird looking bug that has a human skull pattern on it. On doing a bit of research it is found that it relates to some Greek mythology and a Greek deity. To add to the enigma, there are two similar kind of deaths- again industrialists. From here the story just gets more and more engaging.

I liked the way the author has managed to engage the reader in the guessing game, and placing the clues. And the most appealing part was speculating who the narrator was behind the first few italicized lines of every chapter. The lines had an eerie feel.


This one was good too. There’s a case related to politicians in Karnataka, probably involving the ISI, mysterious of course. There’s the involvement of mythical elements- Balla- the dormant demon and the local deity, and The Children of Light- the international paranormal police. I don’t know whether the concepts really do exist in modern world. The supernatural edge to the story makes it an interesting read.