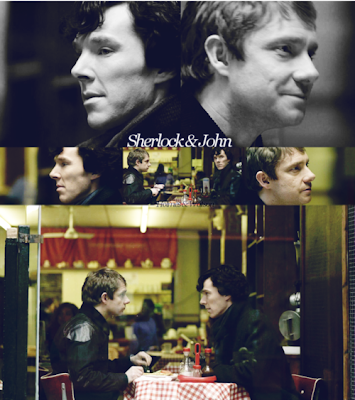 I have been watching ‘Sherlock’- the BBC series, Season 1and 2, and I’m in love with the curly haired, lean built supposed ‘psycho’- modern day Sherlock Holmes(S.H); and his immense talent. Played by Benedict Cumberbatch, he’s just-so-brilliant (even all such adjectives put together wouldn’t suffice). And he unabashedly shows it off too, which rather irritates everyone around him. But I’m so awed and impressed by him, that even in his show-off mood, I'm all praises for him. Everyone around just seems so ‘dull’, ‘boring’, and ‘mundane’ in his presence. I even love the way this insane person says the word ‘boring’ with an elongated ‘O’ hanging in the air.

Sherlock has a habit of ordering everyone around. And others have no choice but to succumb to his whims, and moody authoritativeness. This man is a weird creature- literally and officially. He never sleeps when in middle of a case; keeps a severed head (a human head cut off from a corpse in the morgue) in his refrigerator to perform experiments on saliva coagulation; and bangs his head- becomes a complete version of pure insanity- when he doesn't have a case to work on. He uses nicotine patches, has a human skull and breathes in the ‘breathed out’ smoke from other people’s cigarettes- to ‘think’.

Some of the hilarious moments:
S.H- “Shut up!!”
Police-“But I’m not saying anything.”
S.H- “You are thinking it. Stop it. It’s irritating!”
LOL!!
Here’s another:
S.H- “Shh, everyone. I need to think.”
Police- “Can I help you with anything else?”
S.H- “Yes, if you all could shut up a bit, and stop making all that noise, it would be great. For now.”
Police- (bewildered) Oh, Ok.
S.H-“Argh… EVERYONE stop what you are doing right NOW, turn your backs to me and stand silently. You are distracting me, I need to think.”

I couldn't stop laughing. I am a fan of his accent (Well, British accent in general too. I love British series, this is my second after Downton Abbey), the intonation, and the way he articulates the words- the very sound of it.

I like John Watson’s character too. He blogs too- just like me! I’m always over excited when I find similarity between a character and me. He blogs about Sherlock, their cases, and how Sherlock doesn't even know that the earth goes round the sun, as he has deleted the information from his hard disk(his brain) since he deemed it not important!

I love the character of Mrs. Hudson too.  She’s such a darling- so sweet, so caring and so not-complaining even when she discovers polythene full of human fingers in Sherlock’s fridge and shivers in disgust. She’s so dear and kind. She’s an important part of Sherlock and John’s lives. And there are LOL moments too, when outsiders, fans and enemies imply S.H and John as a couple and Mrs. Hudson seconds their opinion. And John just murmurs, “People are definitely gonna talk.”

I just love the theme music of this sitcom, and the title track too.

This series welcomed me to the funny, mysterious and thoroughly enjoyable world in 221B, Baker Street. Hats off to Sir Arthur Conan Doyle for creating such a character in such a world. Now I’m officially a fan, and I’m going to read his books- starting next month. 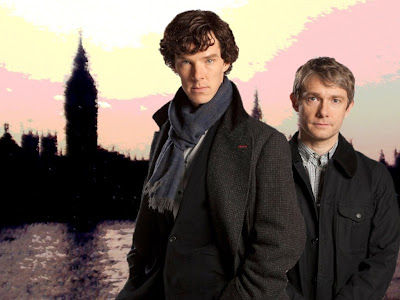