Characters in "Hold My Hand" - A novel by Durjoy Dutta 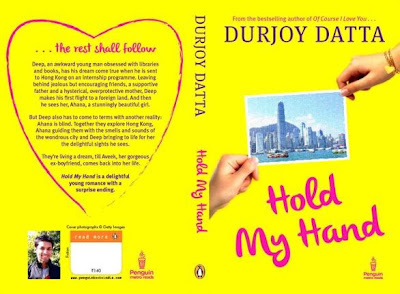 Deep is tall, slim, nerd mama's boy who loves to devour the delicious dishes cooked by his mom. He is an avid reader(just like me!), loves the look and feel of new and old books(just like me!), loves to spend hours at a stretch in libraries(just like me!-excited at the very sight of library and books), and is a huge fan of Harry Potter(oh, again! would have lived in Hogwarts if it was real.). He likes his old Nokia, the one 'built to withstand wars', and his favorite game is Snakes. He has this oh-so-cute boyish charm- he still believes or rather wants to believe clouds are made of fluffy cotton and not vapour; wants to believe that there is actual magic in this world; and that Hogwarts and all disneyland characters are real.

And he blushes when embarrassed; is on the verge of tears when shouted at; he's awkward at new places and in front of new people; and shy too as eye contact for him means staring at people's foreheads. I love this character-Deep, with all his drawbacks and shortcomings. He reads so much, that books are his constant companion- even when he's at a restaurant! He generally knows more about the characters in his book, than the people in his life; and ends up relating everyone to these characters. His saying- 'Books help us to empathise with people.' I agree. 100%.

I like Ahana too- the way she's portrayed, the way she describes everything in her life, everything around her through sounds, feel and smells. She's blind. She's one of the best characters ever created by Durjoy Dutta. She loves Korean food(and I love anything that has a Korean connection). Man mo temple smells of spirituality and incense sticks; the Hollywood road smells exotic; the 'Venice of orient' smells of sea and calmness and fish; -the whole of Hong Kong, as she describes, is filled with tantalising smells and tasty cuisines. I love Deep's detailed, elaborate, writer-style poetic description of every tourist place they visit-DisneyLand, the Peak Tram, Po Lin Monastery, the famous street market full of tiny shops of all kinds and the crowd(I want to shop there! I wish I could!).

I liked her dad too- he's 'charming and chivalrous in a way uniformed men can be'- as she prefers to describe him. He's a caring, and worried father who wants the best life for his daughter, and is unrelenting in his optimism that one day Ahana would be able to see. He takes her to clubs, restaurants, and gives her freedom. He misses his wife- Ahana's mother, who's no more- she is like a painting 'blurred and faded' in her memory.

I loved the book as a whole. And I want to visit Hong Kong...4/5 stars.
book review durjoy dutta