After Effects and side effects of watching Sherlock!.. 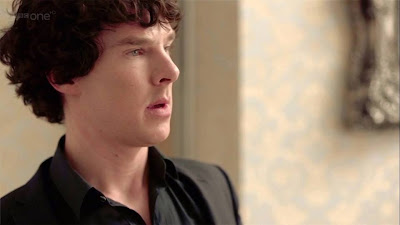 Whatever these producers and directors are doing with us audience is pure, unadulterated torture! How can one expect me and my curiosity to wait till next year?!

Yes, I’m talking about Sherlock. It has been a week and I’m not able to get out of it. I’m still living in 221B, Baker Street- John Watson is drowsing, trying to catch up some sleep; and Sherlock is sitting in front of me, moving his eyes and hands frantically- perhaps he is visiting his mind palace. Yeah, I'm totally there and virtually here in Bhubaneswar. I miss everything. I miss this high functioning sociopath, his voice, his authoritative stance, his gait, his walk, his upturned collar, even his cap.

I hate cliffhanger endings (though I secretly like it too...shhh!). When Sherlock climbed on the edge and called John, I was sure he wouldn't jump. Throughout the emotional dialogues I was sure he would finally find a way out of it. But then he took the leap, and I had goosebumps. He hit the ground from god knows which floor, blood flowing from his head, smeared on his face and on the sidewalks- I swear I stopped breathing for a minute or two. All I could think was, ‘he can’t die. No.no. oh please no’. When John confirmed it, I was lost, totally. How could he die? - I kept thinking. I mirrored John’s emotions, and prayed, ‘Please don't be dead!’ And Lo- and Behold!! There he was behind the tree, watching John cry by his grave! The very first feeling that shot through me was relief. He was alive after all. Oh, I was so so happy. Thank goodness! Made me go through hell, that bastard! And then I was overwhelmed with a big HOW? How is he alive? How did he escape death? John had himself checked his pulse. How did he fool him?


And this very ‘how’ is killing me till now. I tell you, addiction to these sitcoms is the most deadliest one- it kills you through your curiosity.
sherlock