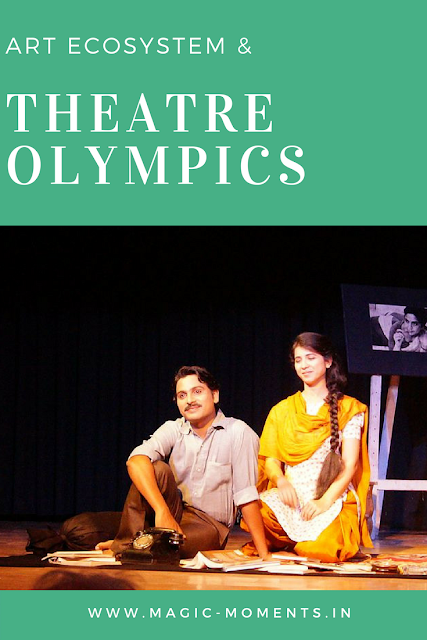 The 8th edition of Theatre Olympics was inaugurated in New Delhi at Red Fort by honourable Vice President, M Venkaiah Naidu on 17th February 2018. The event was organized by National School of Drama supported by Ministry of Culture.
The theme of the festival was “Flag of Friendship”- a celebration of universal human values and the world being a global village. With an aim to bridge borders and blur boundaries for the love of art, this 51 days long nationwide theatre extravaganza featured both Indian and International theatre groups communicating the culture and ethos of people around the world. Eminent theatre personalities performed in various parts of the country on different genres, ideas and forms. A total of 30 countries participated in the festival from across the globe, Australia to France to Russia. The Theatre Olympics ended on April 8th.
This was the first time India was hosting the largest international theatre festival which showcased plays around 17 Indian cities including Kolkata, Mumbai, Varanasi, Chandigarh, Bangalore, Bhubaneswar, Jaipur, Jammu and Thiruvananthapuram. There was enacting of over 450 performances, workshops, a plethora of events involving more than 25000 artists.
The Theatre Olympics is an international festival of a kind that opens dialogue beyond differences in language, cultures and ideologies. It creates a theatre ecosystem that attracts theatre artists and audiences. As a growing appetite for art and theatre among the public, people look forward to the seminars, workshops and the master classes. The theatre acts as a great equalizer that both educates and entertains the masses. It provides a platform for credible stories and answers eternal questions, sometimes leaving people with a feel of life’s joys, and sometimes evoking pity, and empathy, or provoking anger, and outrage. It celebrates artistic exchanges and the extraordinary in ordinary lives through street shows, folk plays, puppetry etc.
The theatre is a 2,500-year-old tradition. The origin of the idea Theatre Olympics came from the Greek director, Theodoros Terzopoulos. Terzopoulos, a visionary, first organised an international theatre festival on the ancient Greek theatre at Delphi, in 1985. The success of this festival gave rise to the Theatre Olympics. Renowned theatre practitioners became the founding members of the Theatre Olympics. They are Theodoros Terzopoulos, Suzuki Tadashi, Yuri Lyubimov, Heiner Müller, Robert Wilson, Tony Harison, Nuria Espert and Antunes Filho. The committee now has 14 members with Jürgen Flimm, Georges Lavaudant, Wole Soyinka, Georgio Barberio Corsetti, Ratan Thiyam, and Choi Chy-rim joining the founders.
The Theatre Olympics was held for the first time in Greece in 1995. Then Japan (1999), Russia (2001), Turkey (2006), South Korea (2010), China (2014), and Poland (2016) hosted the mega event. The 8th edition of the carnival of theatre is ongoing in India.
The complete schedule was available on the official website of NSD. Some of the performances are -“Shikhandi: The Story Of The In-Betweens”, “Kalivesham”(Indian), “Encore”, “Women Of Passion”(Greece), “Essays On Suicide” (Polish), “The Suspended Thread” (Italian).

The article was first published in UC Web.