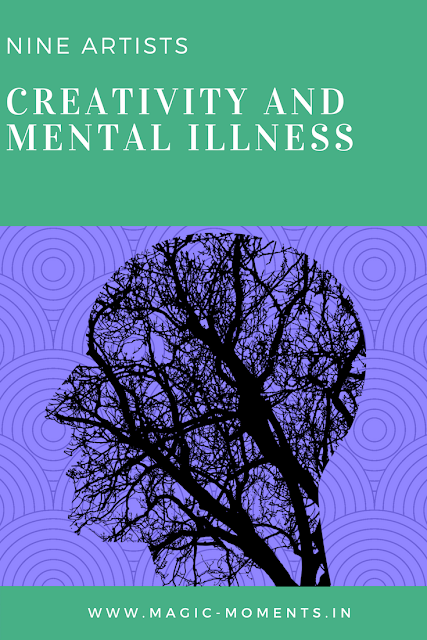 Some studies suggest there exists a genetic link between mental illness and art, ie, the gene that favors creative juices, is also is the reason behind episodes of mental trauma.

Considered to be the most important modernist author of the 20th century, this English born writer is well known for books like “Mrs Dalloway”, “To The Lighthouse” and the essay “A Room of One’s Own”. She was a very profound writer. A feminist at heart, she had a free mind and boundless imagination. She is known to have introduced the ‘stream of consciousness’ in narratives, which today is a powerful writing device. She suffered from bouts of depression, psychotic episodes supposedly because of sexual abuse and harassment.

On March 28th in 1941, she left a note for her sister and her husband, before going for her final walk. It began “I feel certain that I am going mad again. I feel we can’t go through another of those terrible times. And I shan’t recover this time.” She then filled her pockets with stones, jumped into a river and drowned. We lost a legend.

2.Sylvia Plath:
One of the most dynamic and admired poets of the 20th century, Plath was diagnosed with clinical depression and administered electric therapy many times. She is most well known for her semi autobiographical novel “The Bell Jar”, and the collection of poems she won The Pulitzer Prize for. She had tried several times to commit suicide before her death- overdosing on pills, driving her car off the road into the river, among others.

On February 11, 1963 she locked herself in the kitchen, sealed the doors with clothes and tapes to separate it from her sleeping children, turned on the gas and inhaled it till death. She was found with her head on the oven by her nurse.

3.Ernest Hemingway:
Author of renowned novels like “The Oldman and the Sea”, “A Farewell To Arms” and “For Whom the Bell Tolls”, Hemingway went on to win the Pulitzer in 1953 and the Nobel Prize in 1954. He committed suicide on July 2, 1961. He was found with a shotgun wound in his head. He had struggled with depression, troubles in his writing life, had experienced traumatic maniac episodes and had undergone several electro convulsion therapies during his later years. He was considered America’s greatest living writer in the 1950-60s.

4.Van Gogh:
The famous painter and artist of “The Starry Night” had lived almost his entire adult life on the verge of insanity. He had once severed his own ear in 1888, owing to his several mental troubles- borderline personality disorder, schizophrenia and bipolar disorder. Madness, he thought, was inseparable from his artistic genius. He had shot himself in 1890.

5.Pablo Picasso:
The legendary painter and artist is also said to have experienced and struggled with depression. That also encouraged his canvasses of wild, vivid explosive colors and geometric patterns in his art.

6.Edvard Munch:
The painting “Scream” says much about this Norwegian painter’s inner turmoil and demons. His diary entries told about his suicidal thoughts, hallucinations and phobias. He also vividly described his mental breakdowns and overwhelming emotions in his diary.

7.Yayoi Kusama:
This Japanese artist, mostly well known for her surreal polka dot paintings and art installations, is the only living artist in this list. In the 1970s, she had voluntarily checked herself into a psychiatric institution. She is currently a permanent resident of that institution and continues painting.

8.Edgar Allan Poe:
He’s an American writer, editor and literary critic who is best known for his mystery stories. The cause of his death is said to be delirium. Though disputed, says of his mental troubles as well.

9.Leo Tolstoy:
The Russian author struggled with existential questions trying to find meaning in a seemingly meaningless world. His troubles were of spiritual kind, which made him sink deep into depression and melancholy, despite his wide acclaim. His autobiography ‘A Confession’ talks of this and his suicidal thoughts and about why he hadn’t killed himself.