The Shape of Water : A Movie that Reinstated Awe and Wonder 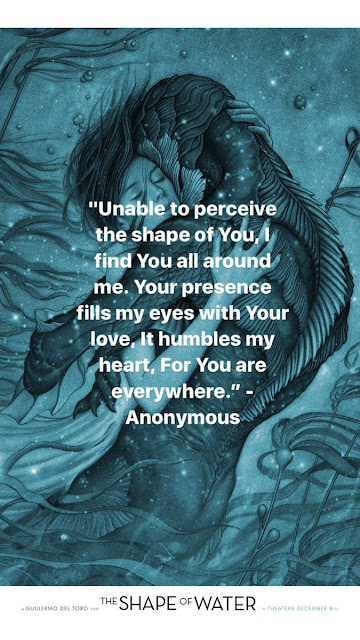 I watched the trailer of The Shape Of Water sometime in December last year. It was enchanting. The voice over started, “If I told you about a Princess without voice….” as the furniture floated about in the room full of water. I was hooked in just ten seconds.

“Experience a connection beyond words.”

The Shape of Water is directed by Guillermo del Toro, the director of Pan’s Labyrinth- the movie that twisted the idea of fairy tales and yet ruled our imaginations for a good number of years. So yet another reason to anticipate the movie and the story it promises.

The movie seems to be a alternate rendition of The Beauty and The Beast. A fairy tale where the beast does not need to change into a handsome prince and there is still a happily ever after.


Both Eliza and the aquatic creature don’t need words to communicate. Language is not a big necessity for connection. They communicate through hand gestures, smiles, and eyes. A daring love story that was unsettling for a while but very fairy-tale like.

- From the SoundTrack of the movie

Water holds worlds unseen. Water is the path to alternate life. Water holds mystery. All symbolism are introduced at the very beginning before we meet the characters. The tables, chairs and the bed floating and the doors leading to hallway submerged in water- the scene itself is so enticing. Loved the imagination.

Eliza Esposito's life is simple. Monotonous routine of chores. Her world is small. A caring and loving father, Giles, who aspires to see his paintings sell. He is the narrator of the story too. A speaking, sensibly blabbering best friend, Zelda who makes sure Eliza keeps out of trouble. Eliza is mute. She talks through sign language, and yellow little subtitles for the audience when the characters don't translate her words.

“Time is but a river flowing from our past.”


Eliza tears the date slip from the calendar to flip it over for the quote of the day. Every day she would wake up to the sound of the alarm clock from deep slumber of her dreams, boil eggs for breakfast, bath, polish her footwear, pull off another date from the calendar and check the quote, sit on the bus and travel to the facility and clean. And she would clean, clean and clean. Same routine every day.

One day while cleaning a special unit of the facility she discovers a water creature. She thinks it to be a Merman. An Amphibian Man. She befriends him away from the eyes of the higher officials, offering him boiled eggs, communicating in sign language and bonding over music.

He sees her as she is. Without noticing how incomplete she is as a human.

“Life is but the shipwreck of our plans.”

The movies about the extraterrestrial beings do have a pattern- friendship and bonding with the alien, and saving the hapless creature from the villainous scientists who want to dissect him in their labs.  But this creature in The Shape Of Water is from the earth, The Amazon River, and the natives call him a god.

Humans see him as a surprisingly beautiful being, scientists consider him a means to explore the unknown, but our mute protagonist sees a lover in him. There is romantic alliance, which seemed strange at first, but the cinematic feat is not blown out of proportion. I found it difficult to digest personally, the love story of a human and an aquatic being. Slightly revolting too, initially. But then anything is possible in a fairy tale. And I threw logic to the wind and let the story take me to different worlds.


“Unable to perceive the shape of You, I find You all around me. Your presence fills my eyes with Your love, It humbles my heart, For You are everywhere.”

The Shape of Water reinstated the awe and wonder that we had as a child, an adult version though. The film is beautiful. It is dangerous too. It makes me both happy and sad. Yearning for another world may be.