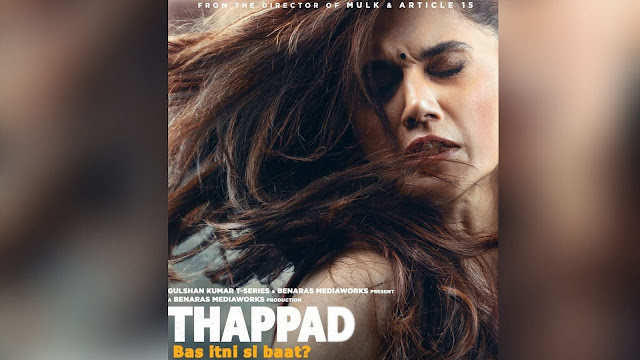 Taapsee’s acting is wonderful. So believable, so realistic and it prods us so much to think. I admired how she could act to be so vulnerable and yet so strong. The slap scene when she just goes numb and confused to as what has happened around her, is deep. And the days passing by, as she tries to deal with the memory of the humiliation, the blow to her worth in the household, her near and dear ones, especially women and younger brother telling her to just move on. Forgive and forget. Let it go. And all this while, Vikram, the once sweet husband, refuses to see that he needs to apologize and acknowledge that it was his fault. And that its not cool to slap your wife, whatsoever be the reason. He stoops down to reasoning his state of mind, and his excuses for it, instead of just saying sorry and meaning it.

Along with Taapsee, there are some amazing ensemble of characters in the movie, whose lives are entwined with her. Lovely characters. I loved Diya Mirza’s characters, I’m bad with remembering names. To a simple question her daughter asked after the incident—had father ever hurt you?—she says no, your father was an amazing man, he’s never ever hurt me—and she explains to Amrita (Taapsee’s character) how things with him were so effortless, maintaining a relationship, and how after his death she was sufficient in herself and she didn’t need a relationship to survive or take care of her daughter. How she gives a hug to Amrita, as she needed it the most, then.

Amrita’s father was one of the best father portrayals I have seen on screen- at par with ‘Yeh meri Family Hai’ – the TVF web series. His shouting at his son for mistreating his girlfriend, made me mouth a ‘Wow!’. His remembering the piece of poetry, the couplet along with his wife, was adorable. His getting sick, since his daughter was hurt was oh so dear. He’s such a lovable father, and makes us believe that men are amazing people. Respectable and admirable. And so many more characters- Netra, the lawyer who fights for women’s rights but her own life is broken; the house help who is so used to domestic violence that she thinks it’s normal.

The one thing about ‘Thappad’ that I admired a lot is its narrative and how in certain scenes the lack of dialogues sufficed and made the audience ponder on similar details of their lives. The repetition of the scenes showing how repetitive daily life is and how we find our peace and normality in this routine. The background score has become my recent favorite. And the lack of songs, except one core song, ‘Ek Tukda Dhoop’, heightened my experience of watching this beautifully narrated movie, where characters are just humane, not showed in the light of evil or good, just people who err and realize much later, due to the patriarchal conditioning they are exposed to unconsciously since their tender years.  And I have listened to this particular song on loop ever since.

Though the end can be unacceptable for some, it fitted well for me, as a story, as a befitting ending, or rather starting of another fresh chapter in life, for both of them. With the hope of a second chance, of reconciliation when both are ready. Or of new turn of events.
movie movie review