It's All In The Planets 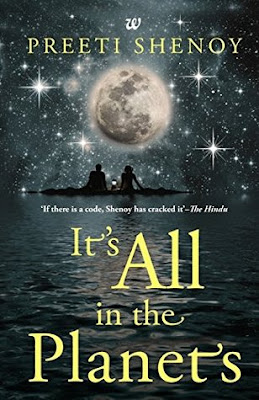 Preeti Shenoy has been breaking stereotypes through her writing since long. Her books have stories around tough female leads, unconventional themes and focused on breaking the prejudiced image that the society holds.

There are those characters who believe in breaking off a year old engagement with their fiancés when out of love, rather than carrying on with marriage as their parents or society would want. And there are those who believe that living-in is a multiple time better than marriage. You’ll find proposals where the girl proposes her beloved move in with her and he replies with a yes. There are unconventional characters and their happy lives which are away from the societal norms. ‘It happens for a reason’ had an unmarried single mother raising her son amidst tough circumstances away from family and all natural support systems. ‘The secret wishlist’ – it is bold when it says that housewives can have dreams and wishlists too. Wanting to do Salsa dance isn’t being an infidel.

Preeti Shenoy’s success is justified- she uses simple to understand words, in keeping with the modern times, and her stories are themed around human relationships, emotions and the intricacies involved which go well with the current fast paced generation. It addresses all the societal pressure, prejudice, and talks on the futility of stereotypes.

In ‘It’s all in the Planets’, Shenoy once again does a romantic tale that is mature, aligned to today’s fast-paced world and is built around the intricacies of relationships. The narrative is from two points of views- one is of Aniket and the other is of Nidhi. The perspectives offer a lot of variety even though they are written by the same author.

She has weaved the tale awesomely around hobbies, passions, lifestyles and dreams. A character named Subbu is a coding buff and computer geek. He loves hacking, and almost every other dialogue from him is a computer jargon. Another character Nidhi has a passion for pottery, writing, blogging and fitness. She teaches the basics of clay modeling and pottery in her beautifully done up studio in Bangalore in weekends. She does some freelance writing assignments in the weekdays, plays fitness and relationship coach to a friend. She also maintains a blog called ‘A Pot of Clay That Holds Gold’ in the meantime. She had left her corporate day job for all these passions, and she is very happy pursuing her dreams. Ambition to her is something other than just money and a lucrative career. She also loves decorating her house and making the authentic South Indian aromatic filter coffee. She is a very strong character indeed. She has insecurities about life and marriage. But that doesn’t stop her from pursuing her passions.


The essence of the story is- Everything is predestined. Everything that has to happen will happen in its own accord when the right time arrives. We might be wanting something to happen and trying towards it, but may be that is not meant to happen. Yet.
book review It's all in the planets preeti shenoy