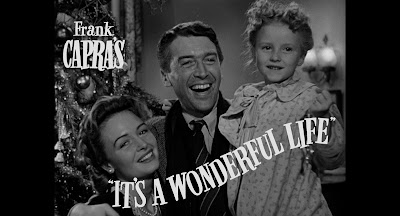 George’s life is beautiful. We are introduced to a happy family, a loving younger brother, true friends, prospective lovers, friendly townsfolk and an average career in the Building and Loan.

Such are George Bailey’s dreams- but he ends up living in the town Belford Falls running the small Building and Loans, helping the townsfolk have their own homes, giving up his higher study plans for that of his brother’s, living in an old dilapidated abandoned house with his wife, earning a meager income just to survive decently. A greater tragedy hits when he loses a large sum of money owed to the bank. He is devastated by the bankruptcy and probable prison. He contemplates suicide. Then enters the angel.

The angel is just so optimistic, straightforward, and innocent. He is such a dear when he puts his words so simply that it is difficult to comprehend for a human. Such an uncomplicated and childlike approach he has to teach George how valuable his life indeed is. Love this character. Love its portrayal. I wanted to hug this old man who is striving joyfully hard to get his wings and get his task done. Million hugs! Be my guardian angel! 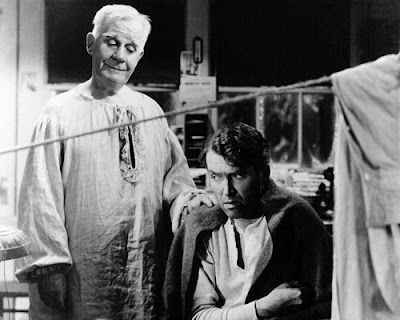 The movie treats such a serious issue of valuing one’s life in such a jolly and humorous manner. One side shows George Bailey- he is contemplating suicide and wishing he was never even born on this earth. He would not have been the cause of sorrow to so many people if that were the case. On the other side, the angel is there with a smile pasted across his face, trying to convince George that life is a wonderful gift. He grants George’s wish and takes him to the world where he was never born so that he can see for himself how different things are around there. No one knows or recognizes George in this world. People he had helped once in childhood or teenage years are in prisons or graves or mental asylums here. His wife Mary is an old unmarried maid here. And his children don’t exist. This world doesn’t have any George to help the people or marry Mary or be a father to four cute children.

While spending our time on earth as mortals each man’s life does touch so many other lives. And when he isn’t around , he leaves an awful gaping hole.

The old world charm of the film drew me in. I have never watched a film from the era before colored cinemas were made. This is perhaps my first ever. And I thoroughly enjoyed it. The parties, the hyper-energetic tap dance, the in-your-face humor, the mannerisms, the Barbie hair-do of the ladies, the poetic renditions in some of the old world dialogues and monologues – I loved it all. I had a favorite scene where George and Mary sing  ‘Buffalo girls can’t you come out tonight, and dance by the light of the moon’ while getting to home after a party.

My take away from this movie is, however, small you may think your life is, the reality is just the opposite. Its reach is far and immense. Your existence here is a phenomenon in itself. You matter more than you think you do.