The Book I Couldn't Finish 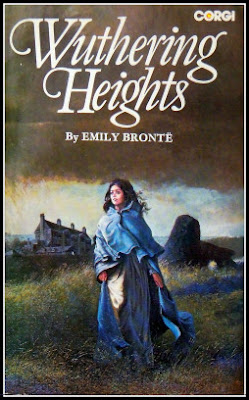 I like reading Classics, now-a-days. So this June I tried reading ‘Wuthering Heights’ by Emily Bronte. Almost halfway through the book, I realized, this is a weird one. I am not able to pinpoint the kind of emotions and feelings this book seems to have burdened me with. Yes, ‘burdened’ is the word. And mind you, this is the review for the half of the book that I managed to read. I left the rest unread; not every book you start is meant to be completed and this is one of those.

First, let us cover the positive aspects of the novel. It is a very passionately written book. Every dialogue oozes with passion; every scene or situation, however lovely or wretched, throbs with unparalleled passion. There’s passion in hate; passion in holding onto grudges; passion in blame, in regret, in murderous revenge, in spiteful words, in bewildered sentiments, in love that peeps in and out amidst all these.

I didn’t like the female protagonist, Catherine. Neither did I like Heathcliff, the male protagonist. Well, on further analysis, I think there are just no protagonists in the story, just antagonists. But, surprisingly, they both managed to make me almost addicted to the story. I read on out of sheer curiosity, just to know what happens next, and what the fate of the characters ultimately becomes. The setting is gloomy, gothic, sad, dark, and tragic. It is a tragedy from the beginning to the end.
Catherine is always ‘extreme’ in everything- fierce in love, furious in anger, and self-destroying in sadness and lament. I disliked her- this is perhaps the first time I disliked a character, that too in a classic. She’s a brat, throws tantrums, wants the world to revolve around her and disregards her own heart(feelings for Heathcliff). Her death occurs halfway through the book. It’s tragic. She succumbs to her own madness, irrational grudges, and unquenched rage towards her fate. She is a mad, enigmatic character- a despicable one, the uncanny one, the unlikely protagonist.

Heathcliff is mad as well. He is always bent on revenge. His life is dark, and gloomy from the very beginning when he is adopted by old Mr.Earnshaw (Catherine’s father). The entire family treats him like an outcast or a servant except Mr. Earnshaw and Catherine. Her brother Hindley treats him rashly, without any regard. Heathcliff bears seeds of hatred and revenge towards Hindley since early childhood. He is disappointed by the way people looked down on him. One day Catherine confesses her love for him to Mrs. Dean (their housekeeper and our narrator) and also her unwillingness to marry the outcast for the fear of the society. Heathcliff overhears this and is hurt beyond repair. The heart-wrenching fate of the characters begins from this very moment. He left Wuthering Heights for three years.

After three years when Heathcliff returns, Catherine is married to Linton. He stays at Wuthering Heights with Hindley and starts with his long overdue plans for revenge. He visits ThrushCross Grange often- Catherine is always pleased to meet him, but this creates a rift in her married life. But again, owing to the madness streak in Emily Bronte’s characters, Heathcliff runs away with Isabella- Catherine’s sister-in-law, and marries with her- even though he solely loves Catherine. Reason? To spite her. Weird!

I left off the book a few chapters after baby Catherine was born, and mother Catherine was dead. Dark. Dark. Gloomy. Tragic. I could almost feel that the tragedy and initial madness was about to repeat itself. And I left it off. Not all books are to be swallowed. Though I am still confused whether I liked the taste of this one or not, I just couldn't swallow it.
book review Wuthering Heights