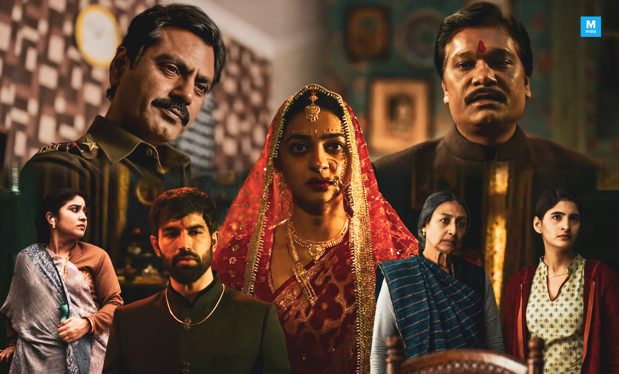 It doesn't seem engaging at first. Seems to have a rather slow start. Not moving fast enough. Not thrilling enough. But you sit through the first hour, registering the numerous characters in your head. Each of them seems to have had the reason to commit the murder. Most belong to the same family, that makes it certain that it is indeed an insider's job. You think it through yourself, as the police and detective does in the movie. You are being taken on a ride. But just as you try to decide to quit watching, something is revealed, piquing your interest. Then something else comes up, making you question your own deductions so far. Then you are hooked. Glued to the screen. It is thrilling, the second half. And the end seems satisfactory, explaining all the open ended questions you have had through the watch. That is an awesome amazing thriller for me.

Since a few days, I have been hung up on thriller movies. Can't get enough of those. Starting from 'who-dunnit' flicks to regional tales, desi noirs. It started with watching 'Basic Instinct' on Netflix. Sensuous, old world charm in a literal sense and very intriguing, it one one of the best mysteries I have watched recently.  I watched 'The Firm' next - a legal thriller starring Tom Cruise. 'Secret Obsession' next, wasn't really impressed by it. After having watched 'Bulbbul' I had been searching Indian thrillers in Bollywood or on OTT platforms, and then came 'Raat Akeli Hai'. Slow start of course, but quite subtly engaging tale. I miss something of a thrill that was in 'Kahaani'.

Do suggest me any movies you have watched and loved. I have 'A death in the gunj' in my watchlist.

I have been reading thrillers too these days. 'The Silent Patient' was by far my best book on mystery this year. Quite worth a read. Deserves the hype around it. It is being made into a movie as well. The rights were gone within a few months of it being published.

Do recommend me any novels in the genre that you can't stop talking about. I have 'The Devotion of Suspect X' in my TBR list.

Murder in the Orient Express was amazing. Worth a watch. Kaun, starring Urmila and Manoj Bajpayee was good enough. Death in the Gunj wasn't a thriller at all, as I was under the impression, it was just a story around a death. Good one, though not a thriller.