A Netflix Original, released on 24th June, Bulbbul is a different take on the subject of witches - 'chudail' as is called in India, narrating the tale from the perspective of the out-worldly being. It is India's very own 'revenant' tale - a person who has returned, especially supposedly from the dead.
The storytelling in the movie is quite gripping. The way it intertwines sweet memory and nostalgia of childhood, the grief and longing of missing someone, the beautiful colors and scenes of old world Bengali zamindar family of British Raj with the Gothic-like feel of spook and fable and a tale of revenge, is remarkable. The dialogues are no nonsense. There's this poetry piece or song - that is sung by two central characters in two different situations, rendering a totally different meaning to the words each of the times. There's a hint of metaphor and word play that seems naturally drawn into conversation. The entire movie is visually appealing - the red hues of the scenes with suspense and thrill inducing music, the sheer innocence and purity of childhood attachments, the gorgeous ethnic wears of a Bengali household, the vicious look of the 'chudail' and the entire setting in itself. It's straight out of a vivid imagination. Eye catching. Had it been released in the big screen now - the cinemas- it would have been a visual treat indeed. 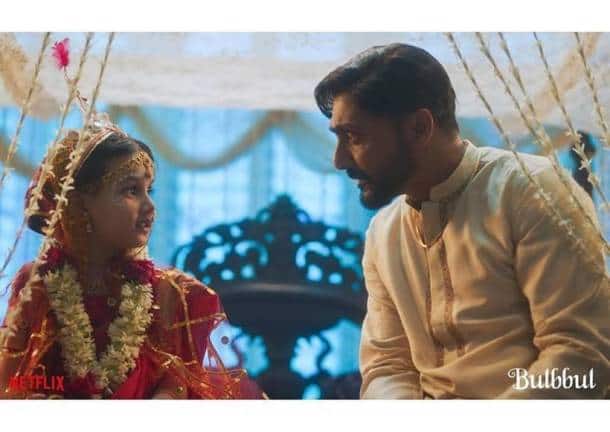 The story is rather predictable, from the very start. An average audience can guess the climax very well. But the selling piece or focus here is not the suspense, or the mystery, but the execution- the narration. There's this back and forth narrative, that holds the viewer's attention. We see Satya, the youngest son of the zamindar family returning home after years to find his sister-in-law has changed in stature and behavior alike. The titular character, Bulbul, is no more her timid and shy self. There are mysterious murders happening in the village, and Satya decides to dig the issue till he finds the murderer, dismissing the village folks' claims that it is done by a 'chudail'. The narrative shifts to show the family dynamics before he left for higher studies, to Bulbbul's child marriage years ago. The story builds up, showing a few pieces of a puzzle at a time, and connecting it all towards the end. Where did the innocent 'badi bahu' -  eldest daughter in law, Bulbul, go? What all events led to this? Why revenge? The movie feels like adaptation of a book, a story already etched in time.

This movie reminded me of Epic channel's adaptation of Rabindranath Tagore's short stories and novels. The emotional appeal, the elaborate visuals, the memorable characters- all fit in. Simple in it's premise and effective in its message delivery. And it also reminded me of 'Tumbaad' - that film which got the audience's attention a bit too late- especially those red hues and the crescendo of the background score. I can easily say, Bulbbul is one of the best movies I have watched of late. It had me searching the internet for more Indian Gothic tales, spooky stories with Bengali backdrop (something about this combination just sticks there right in my mind), Tripti Dimri and Anushka Sharma. It's going to end up in #1 trending some day now, I can feel it.
Do watch the trailer to get a feel of it. Hope more of such storytelling is done in Indian cinema.
Bulbbul movie review Netflix Original review