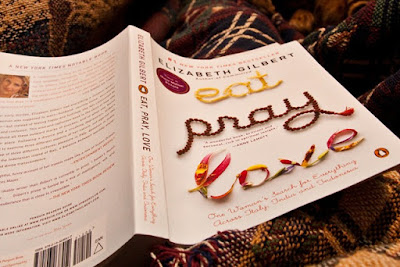 “Way of finding that balance of pleasure of this very world and the connection with the divine is to have your feet firmly on the ground and looking at the world through your heart. “


Balinese culture is peaceful, calm, its foundation being community, friends and family. Being a loner without marriage or family is considered out of the way, and tends to disappoint the Balinese. I love the religious practices, rituals they do to maintain balance; the questions they ask strangers- ‘Where did you come from? Where are you going? Are you married?’ . There are three unpredictable volcanoes in the islands, which is perhaps the reason behind so many prayer practices.

Elizabeth learns from the medicine man- a toothless man with vast ancient knowledge who has no idea of his exact age, the art of balance in life between materialism and spiritualism. Everyone out of balance, everyone wanting to have that equilibrium restored comes to him- children with rashes, women seeking advise on marriage matches, businessmen spooked by evil river spirits. One of the teachings of the medicine man- Microcosm can become Macrocosm. You can become the universe.

Enjoying the sounds of nature- the crickets, the frogs croaking, roosters in the morning, the cat meowing, the dogs howling in the middle of the night, she says nothing displeases her anymore, she no more remembers discontent. What an achievement, I think. Wow. Becoming so powerful in controlling your thoughts that nothing ever displeases you. Isn’t it awesome?

I want to visit Bali- witness the culture, the utopia, the paradise, the world garden, the peace harmony and balance, the Eden of peace where even the policemen wear flowers in the head. Elizabeth describes it as an island of god, where humanity lives in an unspoiled state of bliss; everyone is smiling, beauty and serenity prevail everywhere, the civilization is artistic and religious.