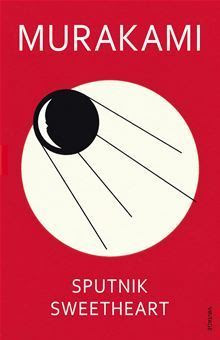 
A mystery story about love, the cosmos and other fictional universes

Sumire is in love with a woman seventeen years her senior. But whereas Miu is glamorous and successful, Sumire is an aspiring writer who dresses in an oversized second-hand coat and heavy boots like a character in a Kerouac novel.

Sumire spends hours on the phone talking to her best friend K about the big questions in life: what is sexual desire, and should she ever tell Miu how she feels for her? Meanwhile K wonders whether he should confess his own unrequited love for Sumire.

Then, a desperate Miu calls from a small Greek island: Sumire has mysteriously vanished...


This is the first book by H.Murakami that I read. The blurb has most of the story. So here I’ll focus on whatever’s going on in my mind after reading this novel.


One thing that I realized by reading this, don’t read it for the sake of knowing what happens to the characters at the end. One reason- it is abrupt. You don’t get a clear ending. It’s open ended- left to the interpretation of the reader. Don’t worry, this is no spoiler. It’s just a recurring fact in almost all of his novels that I picked up from discussion forums.  To enjoy the novel you need to enjoy the journey at your own pace- imbibing the simple story, the routine of everyday in the lives of the characters, making out the meaning of the metaphors and the fairytale like magic that is palpable in the story. Do this, instead of looking for the destination, because there ain’t any destination. The destination does not exist.


In this story too there’s a thin line between the real and the unreal. What is believable and what is not depends on how you decipher the events- the making of an over-imaginative mind of the character or just a facet of reality. For me all the incidents were so believable, still just bordering on the paranormal. The characters love music, enjoy the breeze, drink wine but they also lose a part of themselves in the ‘other world’. Now, whatever you can make out of that. Your thinking gives it its meaning.


In this novel I came across some of the fantastic descriptions. First few sentences make you think perhaps it’s ‘fear’ that the writer wants me to feel now, as a reader. Just when you feel confident that you can outsmart the writer, the description takes another course. The next few sentences you feel perhaps it’s ‘despair’, not ‘fear’. Then again the same happens and you think ‘no perhaps it’s just simple curiosity’.  Then finally you realize, hard on the face, it was ‘fear’ after all- gripping fear. The basic first instinct was right. The writer managed to outsmart you in the mind game while you’re hooked in a loop of thoughts. I had to reread a few paragraphs again and again to assemble all those bits and pieces of thoughts.


I wish there was some expert who could explain these metaphors to me. I wish I could attend a lecture of some kind about the universe that Murakami weaves. Because even after taking almost about three months to read a book slowly and steadily, the meaning of certain incidents eluded me. I am so curious. So so curious. You don’t get the genius that Murakami does in his writings by just reading one book. I intend to read another book by him soon. Soon.