Whisper of the Worms 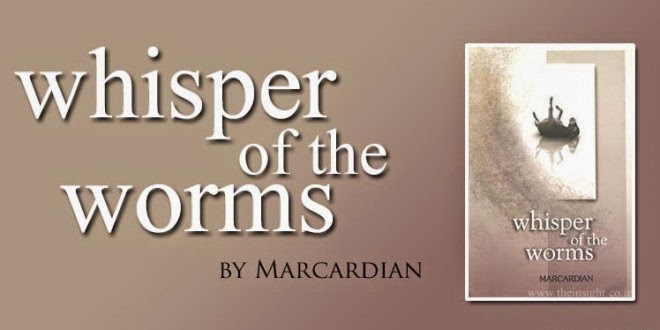 “A crow eyed peep in to the backyard of a banking organization.

An unusual portrayal of the life and times of an ordinary mortal and his subdued fight for survival.

A moving story of the commercialized people in an imaginary country called Marcardia, portrayed through their psyche and polity, makes one think, laugh, and get emotionally choked...

Listen to the Whisper of the worms to hear the muffed wail of the humans on the run, lured by the carrot, forced by the stick..... “

This is a story of Thobias Mathai, his trials and tribulations with the banking system of an imaginary country, Marcadia, and how he is trapped in the politics and corruption of the ‘Smile Bank’ in the final days of his life. The story begins with Thobias being diagnosed with lung cancer, in USA, where he’s settled with his family. He doesn’t reveal this to his wife and his children, and decides to return to his native land, Marcadia to revisit his past before he dies. He meets his mother after two decades, and reminisces the time gone by with his childhood friend. But before he can spend his last days in peace, he has to deal with a fraud case investigation which he’s wrongly put into.

The first part of the book deals with memories, emotional and nostalgic flashbacks, and relationships of the characters near and dear to Thobias. It is interesting to read about the rustic life, the simple living and strong bonding shared by the characters. Thobias had received education, worked in the ‘Smile Bank’ and left Marcadia getting fed up with all the nepotism involved in the system.

Marcadia, though an imaginary country, seems very much like India. The author has drawn all these facts about banking system from reality, and has employed it in the fictional tale. The actual plot begins after about fifty pages. It is a satire through and through. The sarcasm is evident in the dialogues and the very narration. The Marcadians in the banks are synonymous with Indians. It seems that the only difference is in the name.

Though the story is a decent read, it can be a bit uninteresting for certain metro readers. With patience, one can enjoy the story. Some of the things that put me off were the cover page, the title, the monotonous font, the out of the world names of characters and places that I can’t even pronounce. The weirdest ones are Chathukutty, Thresiakutty and Thodupuzha. The cover page is downright boring, and the title seems out of place, as if it is given by accident. Had I been in a bookstore, I perhaps wouldn’t have picked this book.

The book was received as part of Reviewers Programme on The Tales Pensieve.
book review books re